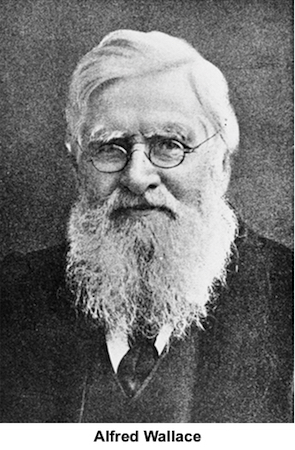 Darwin’s idea of natural selection, or the survival of the fittest, was actually published jointly with another naturalist named Alfred Russel Wallace (1823-1913).

An unbeliever who rejected the faith of his Christian parents, Wallace went on expeditions collecting insects in the jungles of South America, New Guinea, Borneo, and the Malay archipelago from 1848-62. From the native Indians he learned the practice of witchcraft and upon his return to England he became heavily involved in Spiritism and the communication with the dead, eventually publishing a book entitled Miracles and Modern Spiritism.

While in the region of New Guinea and Borneo in 1858, Wallace published a paper setting forth the doctrine of evolution through natural selection. It was titled On the Tendency of Varieties to Depart Indefinitely from the Original Type. He said that the idea “suddenly flashed upon” him while he was sick with malarial fever.

“It occurred to me to ask the question, Why do some die and some live? An the answer was clearly that on the whole the best fitted lived. ... There suddenly flashed upon me the idea of the survival of the fittest. The more I thought it over, the more I became convinced that I had at length found the long-sought-for law of nature that solved the problems of the Origin of Species” (cited from Taylor, In the Minds of Men, p. 79).

Wallace’s idea was based on the idea that species are improved by “the killing off” of the inferior and the survival of the superior. This was exactly what Darwin believed and what he later promoted in his books, and when this “survival of the fittest” proposition was applied to men it became the basis for the eugenics movement founded by Darwin’s cousin.

When Darwin and his friend Lyell received a copy of Wallace’s paper in June 1858, they rushed to go public with Darwin’s doctrine in order to give the prominence to Darwin. At a meeting of the Linnean Society on July 1, they presented Darwin and Wallace as co-founders of the doctrine of natural selection, but they claimed that Darwin had devised it first. After this, Wallace’s name was dropped and Darwin’s exalted. Twelve months after receiving Wallace’s paper, Darwin published On the Origin of Species.

“The facts of the Darwin-Wallace relationship have only come to light in recent years through the diligent efforts of [Arnold] Brackman [in his 1980 book A Delicate Arrangement]. Brackman presents very good reasons for crediting Wallace as the real father of the theory of the Origin of Species. Clearly, there had been a ‘delicate arrangement’ to ensure that Darwin took priority for the theory and that Wallace’s name was dropped into obscurity as quickly as possible. ... Brackman brings together good circumstantial evidence to show that Darwin was guilty of plagiarism. ... All told, a great cloud of suspicion hangs over Darwin’s claim of priority to the vital divergence principle” (In the Minds of Men, pp. 74, 80, 125).

Wallace came to believe in panentheism, in a universe permeated with “cosmic intelligence.” In 1876, he published Miracles and Modern Spiritualism, promoting practices such as seances, automatic writing, trance speaking, and clairvoyance. He said, “My position, therefore, is that the phenomena of Spiritualism in their entirely do not require further confirmation. They are proved quite as well as any facts are proved in other sciences.”

Wallace gave up his view that natural selection could account for life. In fact, he was the father of men like Teilhard de Chardin who have proposed a marriage of science and religion, of evolution and “God.” He proposed “a true reconciliation of Science with Theology.”

“While admitting to the full extent of the agency of the same great laws of organic development in the origin of the human race as in the origin of all organized beings, there yet seems to be evidence of a Power which has guided the action of those laws in definite directions and for special ends. ... Let us not shut our eyes to the evidence that an Overruling Intelligence has watched over the action of those laws, so directing variations and so determining their accumulation, as finally to produce an organization sufficiently perfect to admit of, and even to aid in, the indefinite advancement of our mental and moral nature” (Wallace, “Sir Charles Lyell on Geological Climates and the Origin Of Species,” Quarterly Review, April 18679, pp. 393, 394).

Wallace was a New Ager. While rejecting the sovereign Creator God of the Bible, he believed in a pantheistic “Power,” an “Overruling Intelligence” that is evolving everything toward an objective. A few years later, Teilhard de Chardin, a Roman Catholic paleoanthropologist who was involved in the discovery of the Piltdown Man and participated in the description of Peking Man, proposed that everything is evolving toward an “Omega Point.” To Teilhard, all men’s souls constitute the “soul of the world” that is evolving toward an “ultimate convergence in perfection on Omega and the Christ” (Anne Bancroft, Twentieth-Century Mystics, p. 55). Thus, man is part of the divine and will eventually merge with it. He called his doctrine of evolution the Law of Complexity, claiming that the Omega Point is drawing the universe to itself so that it is being guided toward ever higher states of consciousness. He described the Omega Point as a divine personal intellectual being that is outside of the framework of evolution and that is guiding the evolution.

This New Age merger of science with religion has spread widely in our day. It is even promoted in the Spitzer Hall of Human Origins at the American Museum of Natural History. The displays depict man as a product of blind Darwinian evolution and brashly contradict the Bible’s account of creation, but a video presentation features some prominent evolutionists claiming that science and religion are friends. Francis Collins, director of the Human Genome Project, says, “I’m a scientist that believes the tools of science are the way to understand the natural world and one needs to be rigorous about that. But I’m also a believer in a personal God. I find the scientific worldview and the spiritual worldview to be entirely complementary. And I find it quite wonderful to be able to have both of those worldviews existing in my life in a given day, because each illuminates the other.” This might sound respectful toward “religion,” but in fact it is a bold repudiation of the Bible, because the Bible refuses to speak only about “religious things.” The Bible begins with the account of how the material universe was made, so it refuses to leave such things to “science.” And if the Bible is wrong about the material universe there is no reason to believe it is right about anything else and no reason to “respect” its teachings on any other subject.

As for Darwin, he was sharply opposed to the marriage of God and evolution. When Wallace wrote to Darwin to express this opinion that man could only be accounted for by the “Divine Will,” Darwin wrote across the paper ‘NO!’ and underlined it three times heavily. In his reply Darwin said, “I differ grievously from you and I am very sorry for it. I hope you have not murdered too completely your own and my child” (Loren Eiseley, Darwin’s Century: Evolution and the Men who Discovered It).

“Darwin’s principle of natural selection was chosen by him precisely because it excluded any creative action by God. That is why he was so upset with Lyell and Wallace, and murmured against Gray. They kept letting in God” (The Darwin Myth, p. 139).

Offering: Offerings are welcome if you care to make one. If you have been helped and/or blessed by our material offerings can be mailed or made online with with Visa, Mastercard, Discover, or Paypal. For information see: www.wayoflife.org/about/makeanoffering.html.

Other Books, eBooks
and Free eBooks