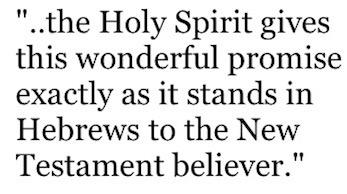 Though it was not stated exactly like this anywhere in the Old Testament, the Holy Spirit gives this wonderful promise exactly as it stands in Hebrews to the New Testament believer. It is a better promise than any similar promises in the previous dispensation. In nine simple Greek words, the eternal God sets forth one of the most wonderful promises man’s ears have ever heard.

“HE HATH SAID” refers to the Trinitarian God. The Father says this, the Son says this, the Spirit says this. “The words ‘He hath said,’ are intensive in the Greek text, ‘He Himself hath said’” (Wuest).

He says this to whom? If we go back to verse 1, we see that the passage is addressed to “brothers.” God speaks the promise of verse 5 to all of His redeemed children.

God says, “I WILL.” This is the promise of a God who has all power, all authority, all wisdom, and who cannot lie. It is the promise of a God who “worketh all things after the counsel of his own will” (Eph. 1:11), whose will cannot be thwarted by any power in heaven or in earth, who says, “My counsel shall stand, and I will do all my pleasure” (Isa. 46:10), who does whatsoever he pleases (Ps. 115:3), who “doeth according to his will in the army of heaven, and among the inhabitants of the earth: and none can stay his hand, or say unto him, What doest thou?” (Da. 4:35).

God says, “I will NEVER.” Never is absolute. Never does not refer to part of the time or even most of the time. It refers to 24/7, 365 days a year, every year of my life. It is not merely, “I will not leave thee,” which would be a wonderful promise, but it is “I will never leave thee.”

God says, “I will never LEAVE.” Leave is the Greek aniemi, meaning to pass from or back. It means to let go, relax, loosen, let alone, neglect, let sink. God will never let go of, relax or loosen His hold on, let alone, or neglect His redeemed child. “It is preceded by two negatives in the Greek text which in English make a positive, but which in Greek only serve to strengthen the negation. It is ‘I will not, I will not cease to sustain and uphold thee’” (Wuest).

God says, “I will never leave THEE.” It is a personal promise. His eyes are not only on all of His people, but on each individual, not only on the whole flock, but on each lamb and each sheep, male and female.

God says, “I will never leave thee, nor FORSAKE thee.” Forsake is from egkataleipo, meaning to desert, to leave behind in any place or state, to abandon. “The word ‘forsake’ is a compound of three Greek words, eg meaning ‘in,’ kata meaning ‘down,’ and leipo meaning ‘to leave.’ Leipo has the idea of forsaking one, kata suggests rejection, defeat, helplessness, and eg refers to some place or circumstance in which a person may find himself helpless, forsaken. The meaning of the word is that of forsaking someone in a state of defeat or helplessness in the midst of hostile circumstances. The word in its totality means ‘to abandon, desert, leave in straits, leave helpless, leave destitute, leave in the lurch, let one down.’ There are three negatives before this word, making the promise one of triple assurance. It is, ‘I will not, I will not, I will not let thee down, leave thee in the lurch, leave thee destitute, leave thee in straits and helpless, abandon thee’” (Wuest).

God says, “I will never leave thee, nor forsake THEE.” Again, the promise is personalized, individualized.

What an unspeakably wonderful encouragement this is! Since the very God of the universe has pledged Himself to the believer and has promised to be with him in the most committed, intimate way, and to meet his every need, what more could we possibly want! Believing this great promise and turning one’s full attention to knowing and serving the God of the promise is the way of spiritual victory and true success in life.

Offering: Offerings are welcome if you care to make one. If you have been helped and/or blessed by our material offerings can be mailed or made online with with Visa, Mastercard, Discover, or Paypal. For information see: www.wayoflife.org/about/makeanoffering.html.